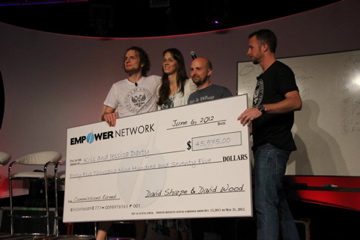 After only 7 months it’s hard to believe we’ve come this far. Me and Jessica just got back from the first Empower Network live event in Atlanta, GA. “Don’t be a Wussy 2012” and as I sit here and write this I can’t help but to be completely amazed at what has taken place since we started this journey less than a year ago.

As many of you already know, prior to getting to know David Wood and plugging into the empower network, I was a broke unemployed construction work from Detroit, MI barley surviving on a fixed income of only $600/month. I was a high school drop out who had never done anything outside of being a carpenter and failing at a few MLM deals along the way.

When I first came online I had no idea how to market and I certainly didn’t know how to setup websites and all the rest of the technical stuff you need to have in place if you are going to make lots of money on the internet.

Yet somehow I’ve managed to make my way into the heart of the most powerful internet marketing mastermind that exists and bring in close to $100,000 in less than a year starting from 0. All I can say is WOW. In the last 7 month with the empower network alone me and my wife have made over $75,000 starting with a list of only 200. Up until the empower network I’ve never made over $40,000 in a year and now I’m on track to be making more than that every month because of the system we have in the empower network.

So back to the story. I’ve never been good with social settings around a lot of people. I don’t know why but they always give me anxiety so I really didn’t know what to expect when we got to Atlanta. But it really was one of the coolest weeks I’ve ever had.

Me and Jessica got in Wednesday and just hung out and made some videos before the big event. Thursday we were invited to a “leaders only” mastermind retreat at one of the most beautiful pieces of property I think I’ve ever been to.

At empower network we’ve attracted some pretty high rollers and my friend Tom McMurrain is one of them. Him and his wife opened their 300 acre ranch to the leaders of empower to enjoy a full day of intense mastermind sessions and just some great conversations. 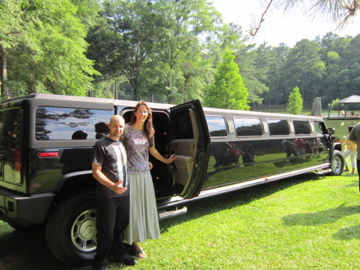 They picked us up in a stretch hummer and drove us to the ranch where we got to hang out with people like Arron & Sofia Rashkin, David Wood, David Sharpe, Tracey Walker, Lawrence Tam, Chuck Marshall, Mark Call, Raven Starre, Rob Fore, Tony Rush, Jon Mroz, Simon Stepsys, and a few more anonymous awesome individuals.

We got to eat dinner with the Rashkins who in the last 4 years have brought in over 3 million in commissions from just one of their income streams. It was really cool to hear their story and how they do their thing. But it was even more insightful just to get to know them as a person along with the rest of the leaders.

We realize more and more especially since we are one among them that there isn’t anything extra ordinary about these people besides they decided awhile ago that they were going to make it work no matter what it took and so they did.

I can speak from experience now that I’m on the other side of things and I have made a lot of money doing what others only talk about. ANYTHING IS POSSIBLE once you decide what you want and that you are going to get it.

Our story is a living one that continues to develop with every hour and what’s amazed me the most is how things just seem to fall in place and come together in a way you couldn’t plan if you tried, once you make the decision that you are going to make this business work for you no matter what.

Of course we hear this expressed in different ways all the time and it is true. But I happen to know the one who controls the future and I’m just so thankful that he is working on my behalf to bring us to where he wants us to be in life and to use us as an instrument to be a blessing to others as we grow into the children he wants us to be. “Now unto the King eternal, immortal, invisible, the only wise God, be honour and glory for ever and ever. Amen.” (1 Timothy 1:17)

If you are sick of sitting by watching as others are having the success you’ve been working on for ever then put your info into the form on the side of this post and get plugged into the real inner circle. Having gone through the process of starting from nothing to a six month celebrity in this industry I know exactly what it takes to get you to where you want to be. Once you are on the inside you’ll get instant access to the video that started me on the path that I now walk. Everyone that seen this had to sign an NDA before they could get to it. And in 6 months that group of 30 people turned into 30,000 and got paid over $6,000,000 (yes million).

Now there is more to this story but I’ll send you that once you are on the other side. Keep an eye on your inbox as the saga continues. 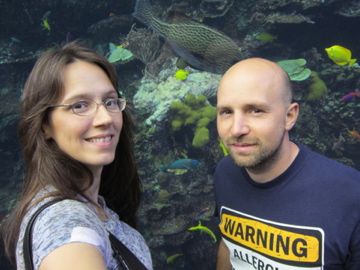 PS if you are sick of wasting time and effort
then Just Get In and I’ll see you on the inside.

Dude! Are you still in Empower Network? I listened to your Inner Circle interview which I believe was the 2nd or 3rd one in the series. It was awesome! So what are you doing now? Thanks! Randy Horton

such an inspirational story.... looking forward to many more :)

I love this post guys! You two are so fun to watch and listen to. I learn a lot from listening to your videos on here. Take care, and I'll see you at the bank.

Just a awesome thing. Have a great day on purpose!